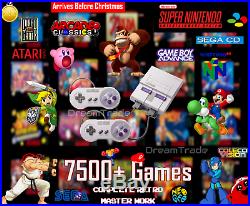 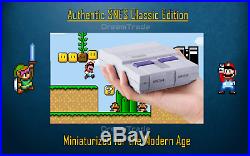 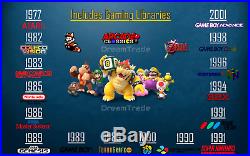 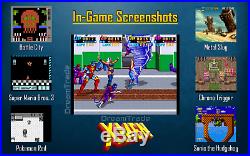 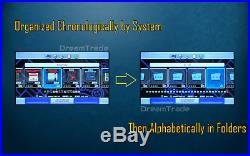 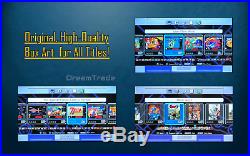 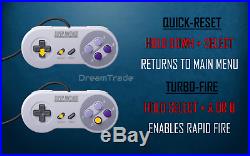 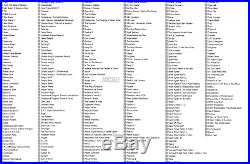 Orders placed before 12/21 arrive before Christmas. You want the very best, most complete retro gaming system? One where design, attention to detail, and functionality come together? You’ve found it. There is nothing quite like this out there – an authentic SNES Classic Edition Mini Console w/ 7500+ games, covering 20+ consoles. This was conceived and designed to be the ultimate all-in-one retrogaming powerhouse. It will come preloaded with the gaming libraries from the most beloved and influential consoles from the golden age of gaming. 300+ of your favorite games in their original arcade form. 1977 – Atari – Every US game ever released. 1979 – Intellivision – Every US game ever released. 1982 – ColecoVision – Every US game ever released. 1983 – Famicom (Japanese-Version NES) – 300 of the very best japanese titles. (2/3 translated to english, the rest don’t require translation to enjoy). 1985 – NES – Every US & EU game ever released, including unlicensed titles. 1986 – Sega Master System – Every US & EU game ever released. 1986 – Atari 7800 – Every game ever released. 1989 – Atari Lynx – Every game ever released. 1989 – Sega Genesis – Every US & EU game ever released. 1989 – Game Boy – Every US game released. 1989 – TurboGrafx-16 – Every US Turbochip game ever released. 1990 – Neo Geo – Every game ever released. 1990 – Super Famicom – 300 of the very best japanese titles (2/3 translated, the rest not required). 1991 – Super Nintendo – Every US & EU game ever released. 1991 – Game Gear – Every US game ever released. 1994 – 32X – Every game released. 1995 – Virtual Boy – Every game ever released. 1996 – Nintendo 64 – 200+ games. 1998 – Game Boy Color – Every US game released. 1999 – Neo Geo Pocket Color – Every US game released. 2001 – Game Boy Advance – Every US game released + Mother 3! BONUS: An EXTENSIVE collection of fan-made games. Highlights include an updated Tecmo Super Bowl with 2020 rosters, NBA Jam 2K20, new Castlevanias, a Chrono Trigger prequel and sequel, Metroid, Mega Man, Final Fantasy, a wide variety of new Zelda adventures (Parallel Worlds included), and an absolutely mind-boggling amount of Super Mario’s. Enjoy Mario in new creative worlds that will challenge and amaze even the most seasoned players! Think you’re a Mario master? N64 games are notoriously difficult. In other words, many do not work or are otherwise unplayable. I have removed the ones that are unplayable. The remaining ones fall into varying categories of performance. Some run quite well, but some will still suffer from choppiness, audio stutter, glitches, or slow down. However, they are quite playable! Including some of the best! FYI: This is bleeding-edge. Nobody can claim a better collection of playable N64 games because it simply isn’t possible. Also, an old-school, corded Wii Classic/Wii Classic Pro controller is recommended (often required) for the N64 games. The default button configuration works flawlessly and the analog sticks will provide optimal gameplay. You may also choose to pair an 8bitdo retro receiver to a compatible wireless controller with analog sticks, although some button remapping may necessary to play certain games. Lists for Arcade, Super Famicom, & Famicom are available in the photos. They are automatically compressed so you will need to zoom. All other libraries are complete. There you have it – Altogether, 7500 games configured to work perfectly on the SNES Classic. No details have been overlooked. This is a Best-in-Class product and an incomprehensible amount of time has gone into this. Every game has high-quality, original box art. All presented in an organized, beautiful user interface. This is truly in a class of its own… Don’t miss out! No set-up is required! This is a simple plug’n play! Power on, Game on! Quick-Reset has been enabled: Hold down arrow + Select to exit your game and return to the main menu where you will have the opportunity to save your progress. 4 save slots per game. You can have 4 separate resume points for each game. There is more than enough room. Turbo-fire enabled: Press Select + A or B button. Works great for games like Contra. What’s in the Box? SNES Mini Console w/ 7500+ games. 2 SNES Controllers. Item is recertified and will come in a plain cardboard box. Item will be packaged with care and arrive quickly and safely. Message me with any questions. The item “Super Nintendo SNES Classic Retro Gaming Console 7500 Games 20+ Consoles” is in sale since Monday, December 16, 2019. This item is in the category “Video Games & Consoles\Video Game Consoles”. The seller is “*dreamtrade*” and is located in Dover, New Hampshire. This item can be shipped to United States, Canada, United Kingdom, China, Mexico, Germany, Japan, France, Australia, Denmark, Romania, Slovakia, Bulgaria, Czech republic, Finland, Hungary, Latvia, Lithuania, Malta, Estonia, Greece, Portugal, Cyprus, Slovenia, Sweden, South Korea, Taiwan, South africa, Belgium, Ireland, Netherlands, Poland, Spain, Italy, Austria, Bahamas, Israel, New Zealand, Singapore, Switzerland, Norway, Saudi arabia, Ukraine, United arab emirates, Qatar, Kuwait, Bahrain, Croatia, Malaysia, Chile, Colombia, Costa rica, Dominican republic, Panama, Trinidad and tobago, Guatemala, El salvador, Honduras, Jamaica, Antigua and barbuda, Aruba, Belize, Dominica, Grenada, Saint kitts and nevis, Saint lucia, Montserrat, Turks and caicos islands, Barbados, Bermuda, Brunei darussalam, Bolivia, French guiana, Guernsey, Gibraltar, Guadeloupe, Iceland, Jersey, Jordan, Cambodia, Cayman islands, Liechtenstein, Sri lanka, Luxembourg, Monaco, Macao, Martinique, Maldives, Oman, Pakistan, Paraguay, Reunion, Uruguay.