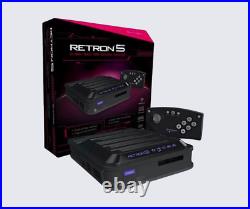 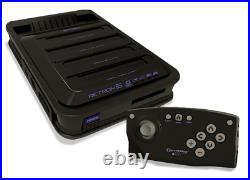 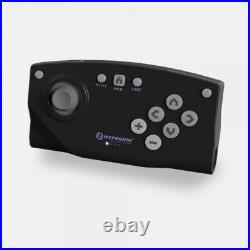 The ultimate HD remake: Hyperkin presents the RetroN 5, a revolutionary new way to experience classic games in high definition; the first of its kind with an all-digital HD output. The RetroN 5 plays Game Boy®, Game Boy Color®, Game Boy® Advance, FamicomT, Super FamicomT, Nintendo® Entertainment System, Super Nintendo® Entertainment System®, Sega Genesis® and Mega Drive cartridges with enhanced resolution, improved interpolated sound, screenshot capture, and the ability to have on the fly save states. The RetroN 5 is the retro gaming console that brings you back to a world where recharging health is cheating, you can have as many guns as you want, and achievements aren’t just some numbers on a screen. In short – you get to experience all of your favourite games from the past, while enjoying the benefits of modern updated console technology. The RetroN 5 has an HD port with a maximum output resolution of 720p and supports up to 60 frames per second. Digital enhancement features are available for all game formats. PAL and NTSC versions of games are supported for HD upconversion and filters, even on NTSC televisions. Side mounted SNES, NES, and Genesis controller slots allow for play with your original controllers. For those who want to go wireless, the bundled wireless controller has a range of over 25 feet. The rear SD card slot gives you the ability to expand your save memory and for capturing screen shots in jpeg format. Game Genie is built in to make sure that your nostalgia isn’t killed by games more difficult than you remember. The RetroN 5 cleans up & upconverts your games to clean, crisp HD resolution. If you prefer old school though, you can select the “scanlines” video filter. Dynamic controller mapping allows full customization, even with original controllers. The RetroN 5’s save state feature allows you to save at any point in your game and be able to come back exactly where you left off, no passwords needed. Access these features without ever having to end your play session or reset your game with a touch of the Home button, bringing the convenience of a modern console to retro gaming. Every RetroN 5 comes packed with a wireless controller. It features an D-pad, two shoulder triggers, a start and select button, as well as 4 macro and 8 controller buttons. All of these are programmable and can be mapped to any command through the settings menu. The controller also has four blue LED lights indicating its battery life, and recharges through an included Micro-USB cable which connects to the RetroN 5. Compatible with Sega Master System® games via converter. HD output – maximum output resolution of 720p. Save or load your games at any point. Audio Interpolation, the RetroN 5 will produce a smoother, crisper sound output. Pre-Built cheats that can be accessed at any point. 2 original controller ports (6 total). Play both PAL and NTSC cartridges. Included in the Box. 1 x Bluetooth Wireless Controller. 1 x HDMI Cable. 1 x AC Adapter with 4 variable head sockets. This item is in the category “Video Games & Consoles\Video Game Consoles”. The seller is “pixelcrib” and is located in this country: AU. This item can be shipped worldwide.