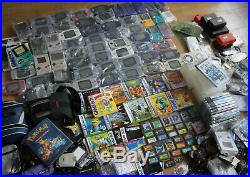 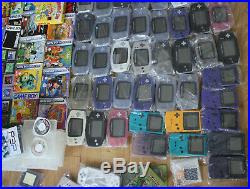 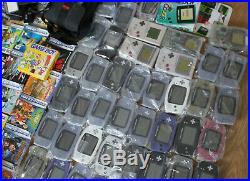 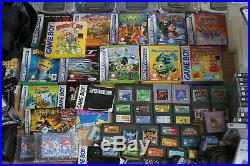 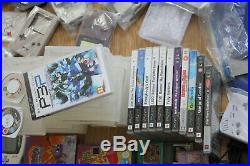 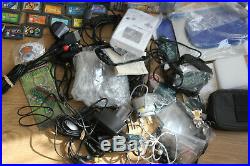 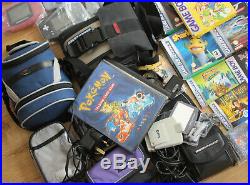 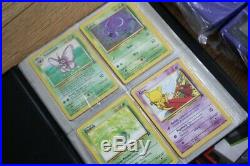 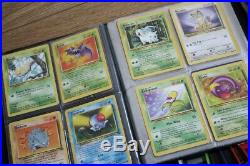 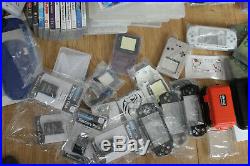 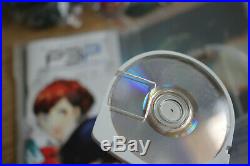 I couldn’t quite fit the full extent of the title there. A mixture of all sorts here. Contains working and non-working items. 95% of the game cartridges/discs work, but all the consoles are without motherboards. They all contain their original LCD screens which all work perfectly for the GBA and GBC consoles. (But of course, will not operate without the motherboard) I’ve just used these for seperate personal projects. Starting with the Game Boys. 41 x GBA consoles – These contain NO motherboards as they’ve been taken out and used for other projects. It’s mostly just the shell, LCD panels and buttons. All LCD panels work perfectly, but of course, will not operate without the motherboard. I took the motherboards out to use for projects. Some buttons/screws may be missing also. Ideal for spare parts. 9 x GBC consoles – Same as above – These contain NO motherboards as they’ve been taken out and used for other projects. 5 x DMG Game Boy – Contains NO motherboards , as they’ve been taken out and used for other projects. Two of the LCD panels has some sort of bleed and don’t fully work. Also, some buttons/screws may be missing also. 1 x Flat-packed empty GBC Japanese box and 1 x tatty original GBC European box – Empty with no contents. 1 x Faulty GBC LCD IPS Panel only. (In the bubble wrap next to the teal GBC on the upper right). Bundle of about 45 boxed and unboxed Game Boy/Game Boy Colour/Game Boy Advance games – These all have been tested and work great. Cosmetic conditions vary from tatty to good. All boxes contain their game cartridges and booklets inside – Some are just missing their inner cardboard trays. (Except Bart vs the Juggernauts – This one is just a very tatty box only – no inserts or game, etc) Mario and Yoshi is also very tatty, but does contain the cartridge. There’s just three games that doesn’t work which is the Super Mario Advance GBA game (does not boot) and the two’Sonic 3 Complete’ Mega Drive games (randomly freezes during gameplay). 1 x Pokemon card folder with a small bunch of cards – Mostly basic ones. Folder condition is average, a bit rough, 5/10. Various Gameboy accessories – chargers/link cables/carry cases/bags/etc. 3 x Universal PS1/PS2/SNES/N64/GC cables – Didn’t pass my quality checks, but some parts of them will work. Bundle of PSP games/umds – All work, except for the star of the show, unfortunately. (Persona 3 Portable – PAL version) This is actually a rare game, but I find it has issues loading. I found that the PSP recognised the game, but upon selecting it, it does not load. Having looked at the disc, it has a smear mark which I cannot remove and so I have to list this particular game as non-working, but potentially a bargain if it can be professionally cleaned and restored! Bundle of other additional random Game Boy shell parts (towards the far right of the photo, to the right of the PSP games). A few PSP faceplates and a white PSP housing kit – just some imperfections with those. PSP Mains power supply – Faulty. A couple of PSP batteries. I think these are dead. Some empty plastic cases (Does not contain any FunnyPlaying IPS V2 kits – just empty). A bunch of Twin Peaks keychains, Pickle Rick pins, TMNT keychains etc – visual imperfections I found not fit to sell at full price. Oh, one of the PSP Lego Batman games has been taken out. I think that’s everything! Hopefully someone can make some use of these things! If there’s any more info or extra photos of any specific thing in this listing, please let me know and I’ll help out! This will all be sent via courier, tracked, insured and signed. The item “Retro Game Bundle Game Boy Consoles, PSP games, Pokemon Cards, etc Please Read” is in sale since Saturday, June 6, 2020. This item is in the category “Video Games & Consoles\Video Game Consoles”. The seller is “spot_goes_to_hollywood” and is located in Scunthorpe, Lincolnshire. This item can be shipped to United Kingdom.